Amending Fences, written by M.A. Larson, is the 12th episode of Season 5 of My Little Pony Friendship is Magic. This episode originally aired on July 4th, 2015, noted as a holiday in the U.S with the Independence Day.

Originally, the airdate was supposed to have been on July 18th, 2015 as what AT&T Uverse had said. Kora Kosicka was the one who designed the character Moon Dancer for this episode.

The story of the episode is that due to an off comment from Spike from how much of a lousy friend Twilight originally was before she came to Ponyville, Twilight, now a more sociable and the new Princess of Friendship seeks redemption in the eyes of her old and former friends by trying to reconnect with them and hope they'll forgive her for her past behavior towards them by forging a new and stronger friendship with them.

1. A simple idea of 'what if Twilight made amends to the group of ponies she blew off at the series pilot' becomes a great and heartfelt story. This episode's story idea may have started out as a simple Twilight wishes to make amends for her past actions towards her old friends at Canterlot, but proving that a person can take the simplest of things and make something great about it.

In the episode, not only do we see Twilight not only feeling regretful for her actions by inviting Minuette, Lemon Hearts, and Twinkle Shine over to a get together at Donut Joe's Donut shop to apologize from there. Despite this, these three ponies have shown they have no hard feelings towards her, pointing out that it was something that they were used to from her. 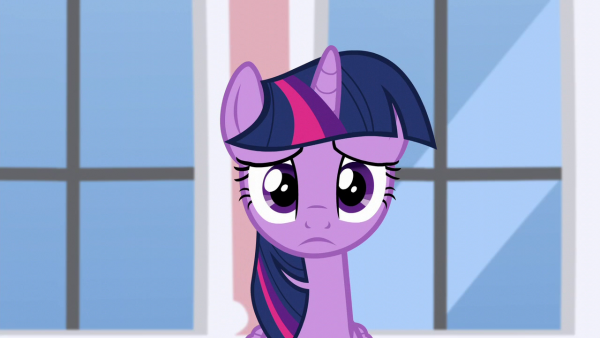 Which Twilight could feel how terrible of a friend she must've been back then.

However the story takes an interesting turn where after they see their old science lab in Canterlot, Twilight asks where Moon Dancer was to which they replied she was living alone studying. There we see perhaps a 'what if' for Twilight should perhaps she never had any friends to deal with and solely focused on studying. 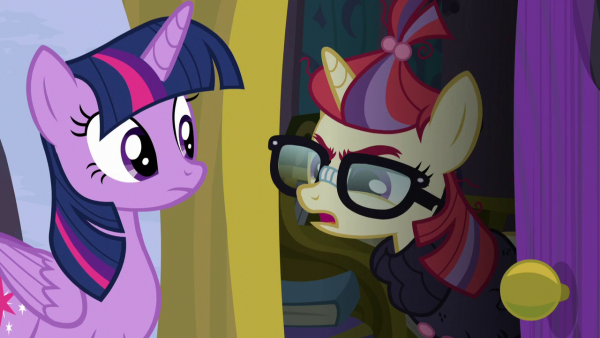 To make the comparison even more apparent, Moon Dancer is a recolored palette of Unicorn Twilight Sparkle with a different mane, though she had a similar one to Twilight when they were fillies likely in respect for her. This came at the cost of retconning what the comics had originally portrayed Moon Dancer to look like and be.

Due to Twilight missing out on Moon Dancer's party where she was opening up to other ponies only to have the one pony she valued to miss out on it, Moon Dancer retreated back to her figurative bubble to never have to worry about friendships again. Twilight takes on trying to reach and bond with Moon Dancer as her next challenge to fully amend her past actions through a variety of attempts such as trying to communicate with her at the library: 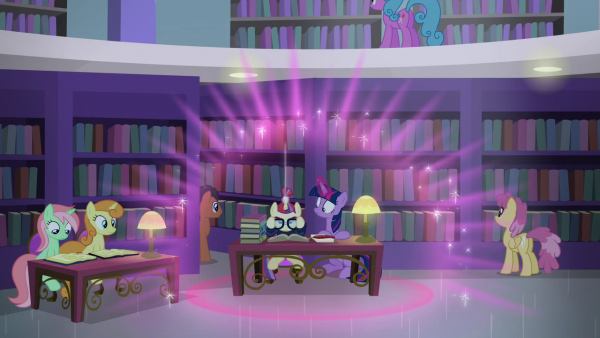 It didn't work well for her there. Note folks, Twilight's bubble shield can block noise. Put that in your notes for Twilights powers.

She tried offering the key to her old room and library to Canterlot as caretaker and owner at the price of coming with her to a dinner with their old friends. Moon Dancer only came because Twilight promised to teach her Hayscartes methods of learning by literally emerging herself inside the book, which I'll explain a bit on later. Despite Twilight's earnest attempt to bond at the dinner party, Moon Dancer still brushed it off and even left abruptly from the dinner and refuse to listen to Twilight any longer. 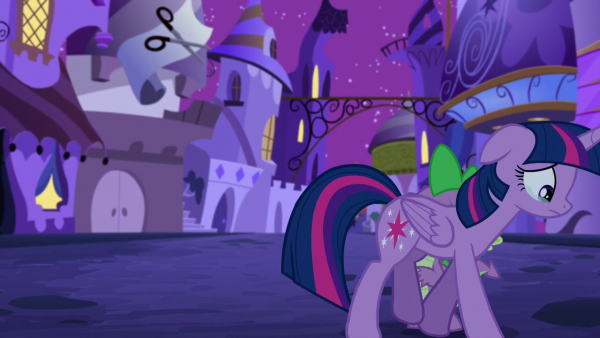 Causing poor Twilight to be heartbroken for what she had done.

In another showcase of Twilight's power, being able to see into the past of an environment allowed Twilight to see the events of Moon Dancer's party that Twilight left. Seeing how heartbroken Moon Dancer was, Twilight knew she needed the best party planner around to quickly rectify this error Twilight had committed in the past. 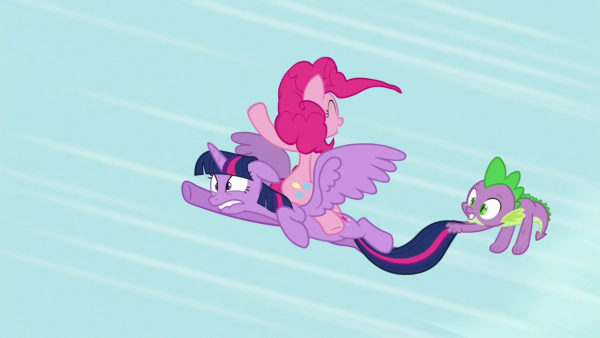 Twilight also become a stronger flier now that she is able to handle Spike and a full grown pony on her back.

There at the 'please forgive me for what I've done to you' as I like to call it party, not only did they managed to woo Moon Dancer to it by leaving a trail of books for her to collect but there, Moon Dancer cracks from what they've done and reveals to Twilight for just how much she had hurt her for not attending the one party that Moon Dancer did so she can open up and bond with ponies better.

Moon Dancer: Well, sure, why wouldn't it? That was only the first time I put myself out there, and then you didn't even bother to show up! Then you left town without saying goodbye even though we were supposed to be friends! I was humiliated! I felt like I wasn't important! I never wanted to let myself be hurt like that again! Those three finally convinced me that I had value! That other ponies might like me and want to be my friend! And you! Didn't! Show! Up!

Not only was this a heartfelt, sincere, and powerful message from Moon Dancer, but it also makes Twilight's efforts in the episode even more potent. This episode's narrative held nothing back to show the audience that one of the mane 6, Twilight Sparkle, the princess of friendship, screwed up badly by betraying that bond of trust she had taken for granted in her past life in Canterlot. Seeing Moon Dancer cry her heart out to reveal of how traumatic her emotional experience shows of how horrific Twilight's actions were leaving Moon Dancer behind to focus on other stuff instead of her. Twilight's efforts to make amends to them for betraying the trust, especially with Moon Dancer, is made all the stronger because she has genuinely hurt someone and only seeks for that person to forgive wholeheartedly for what she had done by showing to her old friends of how much she regrets what she had done and wishes to form a new bond of friendship as a way to show she has changed as a person and wishes to be a better friend to them than what she once was.

Twilight Sparkle: I'm sorry, Moon Dancer. I've faced magical creatures, the end of Equestria, all sorts of things. But seeing how my actions affected you, that was one of the worst feelings I've ever had.

Once they've made up and become better people from it, there Moon Dancer and Twilight Sparkle emerged better characters as Twilight rights a past wrong she had committed and formed a better bond between herself and her old friends, and Moon Dancer learns to hang out with her friends more and not bottle herself up to waste away and instead join and have fun with friends instead. 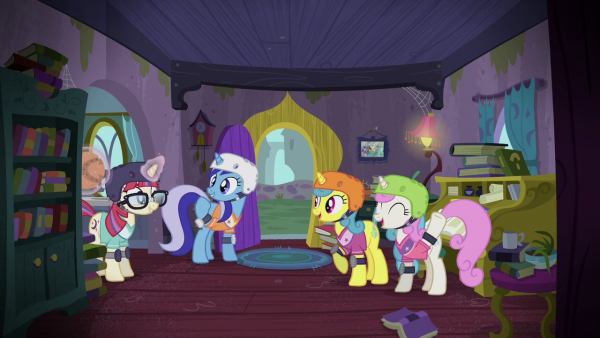 Thanks to one of the most emotional and best moments in the show, this not only cements Twilight's status for best pony in my personal s5 rankings even higher, perhaps even topping it, but it's also likely Moon Dancer will be the best new pony introduced this season and possibly one of the most secondary ponies in the fandom soon if not already.

2. The Hayscartes method may actually be a reference to the famed French Philosopher Rene Descartes. Thanks to Sunset Master in his own personal review for finding that reference, here's a quote from Descartes himself: Cogito ergo sum. This is often translated as: 'I think, therefore, I am.' Seeing how this spell allowed Twilight to literally become one with the book to help her better study, there is validity to that fact.

To make the connection to that reference even greater, Twilight did pointed out that she had a copy of his 'Treatise on Ponies', a reference to Rene Descartes's Treatise of Man.

Here's a link to SunsetMaster's personal review on Amending Fences, including the point I'm using in my own review as I loved it too much. 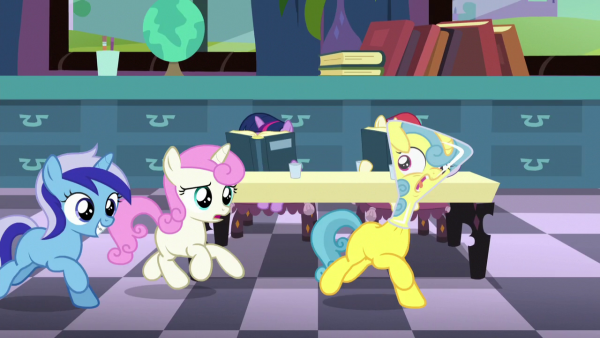 That's not a beaker, Lemon Hearts, that's a flask.

One humor I particularly liked seeing in the episode.

4. The rest of the Twilight's old friends also received some character development as well. While their developments weren't as great as Twilight or Moon Dancer, I did like some signs of it from them.

Minuette: She's a pony who not only seems to be fond of hourglasses, but she's also noted friends with Pinkie Pie. Perhaps because both are cheer happy ponies. Wore braces as a filly.

Twinkle Shine: Not much on her other than what the other ponies are doing or know.

Lemon Hearts: Had her head stuck on a flask once. Has a career where she arranges state dinners and other formal events at Canterlot.

Also, the fact they've been given speaking roles in an episode will allow them to have a niche in the fandom's art community. 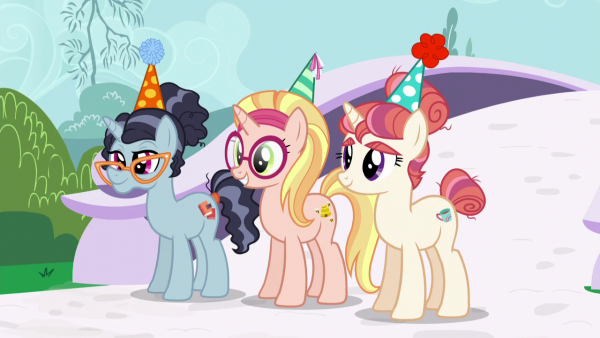 Notice how eerily similar that middle bookseller pony does to a certain someone from Disney's Big Hero 6?

1. Who was taking care of Twilight's library in Canterlot while she was gone? While the state of the library held little impact to the episode, it's one that annoyed me simply for how did the library ended up in such a state. Being with many pieces and other aged items on the floor after Twilight left it when she was transferred over to Ponyville by Celestia; it begs the question why and how would anyone just leave it there. I want to make here If Twilight still owns it as possession of her key implied, how could Twilight not have paid any attention to a library filled with books that she personally own for over a year? Still, it may have served as a metaphor to Twilight's attitude to Canterlot previously, uncaring for it but the pieces remain for her to return when she realizes of how much of an ass she had been in her past.

2. The ending felt a bit rushed. While not especially damaging as there was little to be further invested in the episode after Twilight and Moon Dancer made up, still I felt the rushed party was caused in part to make for the time it needed to make for Twilight and Moon Dancer to further cement their friendship as friends to visit every now and then on Twilight's part and to see that epilogue of Moon Dancer joining with her old friends to play a game of sport.

3. The start felt contrived. While not an especially big deal in hindsight, the fact Twilight's conflict in the episode was only caused by an off comment from Spike instead of her own action felt like it was forced to get the conflict of the episode going. Overall it's not too especially harmful in the end after reviewing it.

Conclusion: This episode is quite possibly the season's second best episode in my opinion, exceeded only by the season pilot. Giving a great spot of character development to Twilight and to Moon Dancer to where they emerge better friends after Twilight sought Moon Dancer's forgiveness for her past misdeed. Showing one of the most human portrayals of Twilight since Winter Wrap Up and possibly even exceeds that, this episode is among the best Twilight episodes in the series for what it had shown. Finally, with a great spotlight on Moon Dancer and her portrayal in the episode, she'll quickly become a favorite in the fandom like many other secondary pony characters.