Rayman 2 is a platforming video game developed by Ubisoft studios Montpelier, Milan, Shangai (DS), Montreal, Casablanca, DC Studios for the 3DS, and Gameloft for the iOS. Due to Ubisoft porting the living crap out of this game in future consoles, this video game has been on PC Windows, Nintendo 64, Playstation 1 and 2, Dreamcast, Gameboy Color, Nintendo DS and 3DS, and Apple's iOS. Its original release to make things simple was on October 29, 1999.

Originally, this 3D adventure of Rayman was supposed to be another 2D video game in the same vein of its predecessor and first video game in the series and it was supposed to release for the PS1 and Sega Saturn. However, due to rising and effective technologies and techniques for 3D platforming after Super Mario 64's influential success in it, this idea was scrapped in favor of making it a 3D game. Concept art showing some 2D art designs, scrapped powers that were mentioned or redesigned such as the platform fist were put in the video game magazine EGM, and a beta version of the original 2D version of Rayman 2 can be unlocked in the Playstation version of Rayman 2.

It's story is that a large Robo pirate invasion force came to Glade of Dreams, Rayman's and its inhabitants world, to steal it's populace for slavery. Successfully destroying the Heart of the world and splitting it into 1000 yellow lums (or 800 in the Playstation and Gameboy color version), this greatly weakens the fighting power of the planet's resistance against the invaders and renders Rayman powerless and he was captured as a result. Thanks to Globox, Rayman's frog friend, and Li the Fairy, they managed to bail Rayman out of his prison aboard the Robo Pirates prison ship, the Buccaneer. Separated from Globox and hearing that Li, who had provided Globox with the Silver Lum to power Rayman up, has been captured, Rayman must not only save them, but also save the world from the Robo Pirate menace by enlisting the aid of a powerful being called the Polokus by awakening him by finding four masks.

1. The platforming gameplay is fantastic in this successful transition of the Rayman franchise to 3D.

The mid 90's to early 2000's was a huge transition period for gaming as many games in order to maintain relevance in this technological race for the best and latest stuff available to the ever evolving tastes of it's consumers. This trend was transitioning the original 2D roots to merge into the brand new 3D environments at the time. Many games that had fame back than suffered in this transition while others however transitioned beautifully and have even remained in the 3D world since. Rayman 2 is part of the latter as not only are the platforming elements and controls tight with Rayman's flair for gameplay such as his signature helicopter fly mode that allows him to descent in a controlled slow flight, flying energy attacks that have replaced Rayman's usual fist attacks from his previous game, and even includes an effective strafing mechanic where you can use it for combat purposes or even to move to the side better.

Its primary gameplay is to reach from the start to the finish of a level with as many items as you can in each level. These items are Yellow Lums that are necessary for you to collect enough to progress to the next set of levels through the hall of doors, and cages where if you get ten destroyed cages you can increase your maximum health to a total of 8 times. These cages contents can include yellow lums and other lums in the game as well. These other lums are red lums that heal you, blue lums that can refill a portion of your oxygen meter while swimming, green lums that act as save points in a level for you if you suffer a critical injury, and purple lums that help act as hook points for you to grab and swing from.

2. The level designs are great as well. Rayman 2's levels offer excellent variety in gameplay to you such as in the level Precipice, you're being chased by a small robo pirate fleet as they attempt to kill you again, get to go swamp surfing in the Marshes of Awakening, or even control and ride a pirate ship in the Iron Mountains. You'll find plenty of intricate and varied gameplay designs that will surely keep Rayman 2 fresh and entertaining throughout.

3. The graphics in this near 15+ year old game is beautiful and among the best designed games I've seen in this department. One thing I love about the Rayman franchise is how gorgeous their games are. This game is no exception as not only do the environments of the Rayman verse portrayed quirky but show a delightfully bright and vivid imagery in color and in appearance. This helps immerse yourself into the world of the Rayman verse as you can feel the environments in the game alive, weird, and aesthetically pleasing for most to enjoy. Seriously, I'm surprised I haven't' seen more Rayman fan art considering how gorgeous their games are unless there's a nefarious reason. 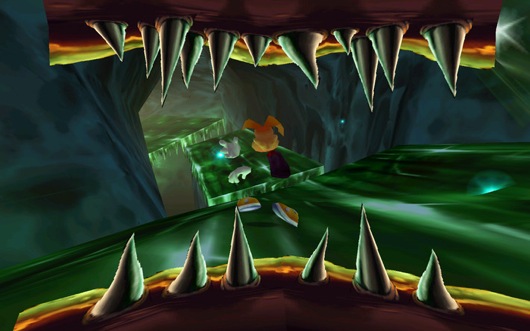 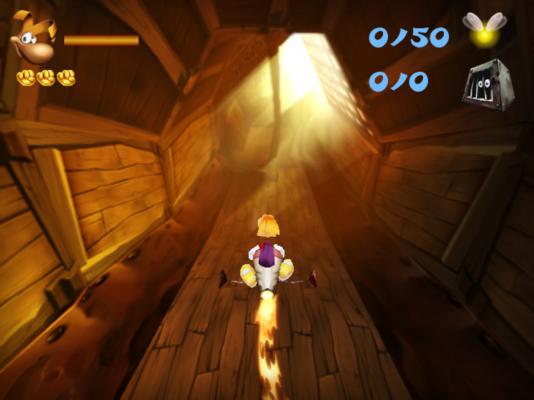 Some examples of how gorgeous the art design is in this game.

4. The story and characters are effective in this game. Returning Rayman is still the likable hero who now is put at his low after his defeat at the hands of the Robo Pirates. Despite his circumstance, he still keeps a cheerful outlook on things and is willing to do whatever it takes to save his world. Along the way, he meets Li the fairy, your helpful mage foxgirl who helps Rayman out by boosting his powers to better heights, and even provides two bonus levels that provide a relatively easy 100 lums in total for you to collect while restoring your health to full capacity and provide a powerful boost to your fist attacks that last after 3 hits from the enemy. Another one is Globox, Rayman's best friend who is a married frog to his wife Uglette and their dozens of babies, the teensies, and many more that would leave a good impressionable impact on you.

The story itself is actually an effective story where Rayman must find the means to awaken Polokus, the most powerful being in the Glade of Dreams to enlist him in the fight against the Robo Pirates while traveling around the world meeting all kinds of different creatures, some friendly and some aren't, while traversing through many treacherous environments to reach his objectives. Than at the end of the story, you'll face the leader of the Robo Pirates, Admiral Razorbeard in a duel to the death while he uses his mech to kill you. This entertaining adventure story can entertain those who do like a good story.

As part of the collectibles in this game is that the more yellow lums you collect, the more lore pieces you can acquire so you can better understand the world of the Glade of Dreams better. Some of the lore logs are hilarious to read.

5. The music is also good. The wonderful musical score in this game help match the aesthetics of the environment from the creepy and eerie Tomb of the Ancients to the energetic beat of the Precipice (yes that's one of my favorite levels in the game) along with many others you'll enjoy. Also of note, the N64 version has a different soundtrack from the other versions of Rayman 2 but both are entertaining to listen to.

For your listening pleasure folks. This is the PC version that I played on.

1. Bonus levels are difficult to achieve if you don't know how to do alternate rabid button presses well. If there is a problem I had with this game, its how due to my poor skills with rabid button presses as I cannot beat a robo pirate in a race, I have never beaten a bonus stage at all. Because of that, I have never beaten them at any point in my playthroughs. If anyone has, please tell me what it provides. However this critique of it is more a problem with my poor skill in alternate rabid button pressing. Fortunately, I do not believe they're necessary to beat the game to achieve 100 (or 99.9% in my case).

Conclusion: Rayman 2: The Great Escape is easily one of the greatest platforming games ever to have graced the genre. With its ageless art design, fantastic and varied platforming gameplay, excellent level designs that offer a good variety of gameplay, some quirky and interesting characters, a good story, and a good ost that help make this game a classic 3D platformer. Personally, if you want to have the best Rayman 2 experience, getting the PC version at GOG.com, the N64 and Playstation versions are a good way to find that as the hand held version don't do the game justice for how truly great it is.