((The following is an interlude to the story thread here in which Remington takes off for gym class before meeting with his fillyfriend Moonlight later that evening.)) 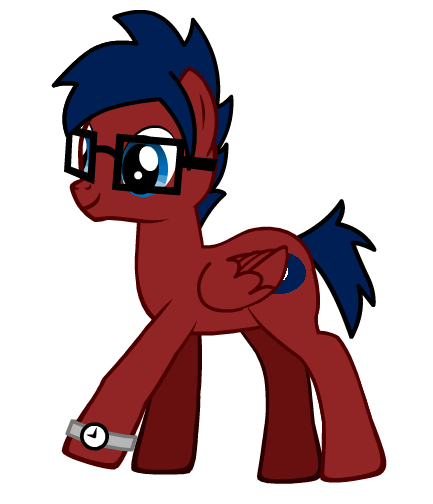 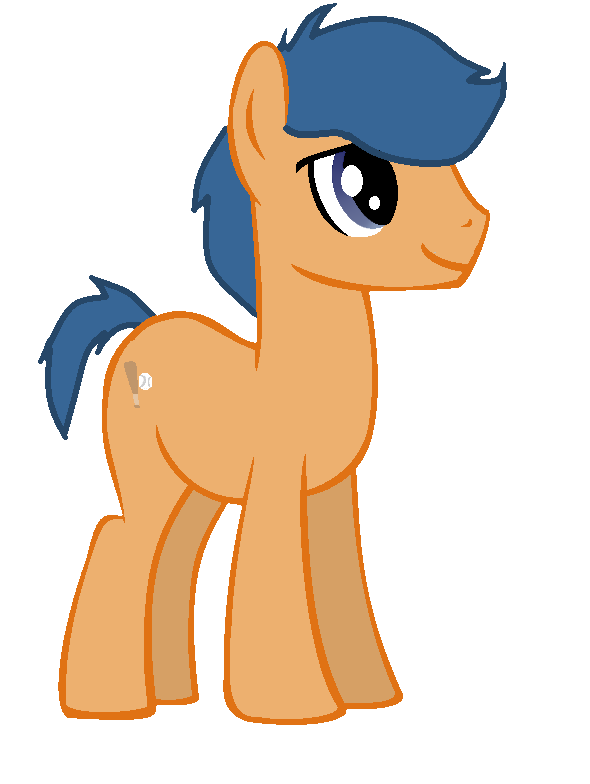 When Remington arrived at the gym, he went into the stallion's locker room to change out of his uniform and into his more athletic appropriate clothing. Not that it would make much of a difference for him. He wasn't very athletic, but like most ponies that would endure a gym class like this one, he would only be required to play fair and work as a team with others in order to get a passing grade. His peak wingpower wasn't all that low, but he would be able to avoid the embarrassment of having to deal with most of the class being stronger than he was.

Today, the class would be outside. The buckball court would be temporarily changed into a diamond-shaped field that had white lines and large square bags on the corners. The game was called base ball. No one had ever heard of it before. This new student in the class, named First Base, came up with the rules of the game and introduced it to the professors and was able to get the go ahead on sharing the game with the class. "It's easy. You throw the ball, you hit the ball, you catch the ball, you get on base." First Base was a pony that grew up in Ponyville and upon getting his cutie mark after hitting a ball with a stick very far, held the imagination required to make this zany, sometimes confusing game.

"Do I hit the ball and then catch it?" Remington asked aimlessly as he was trying to understand. First was attempting to explain to each classmate one by one, but as soon as someone felt they understood, he would go to another classmate and affirm them.

"No, you don't hit the ball until it's your turn. Right now, you're on the pitchers mound, so you throw the ball and try to catch it if I hit it." He stood by the area he kept calling home or the plate. "Throw the ball towards me over this plate, and see if you can get it passed me without me hitting it."

Remington looked confused, but decided to play along. He grasped the ball in his wing and hurled it towards the plate as fast as he could. As it approached, First swung his bat and the ball went flying high over Remington who stared at it helplessly. "How am I supposed to catch that? Am I supposed to fly up there every time you hit it?"

"Well." First paused a moment and thought. "You're actually not supposed to fly in this game, it's against the rules. But you can if you want to, you'll probably still not hit a dinger like that one. Throw me another one."

Remington threw him another ball, as fast as he could. Again, First hit the ball with his bat and it went flying over Remington's head. The pegasus jumped up to take off for the ball, but quickly dropped as he saw it as futile. The ball moves too fast. "I don't get it, how am I supposed to throw this ball passed you."

"Don't worry." First chuckled. "You'll get it. It just takes practice. You see I just want others to play with. Look at everyone." He pointed towards the field of gym ponies, some of them holding gloves on their hooves backwards, some throwing the ball with their opposite hoof or their inferior wing. And even others were just running after balls that they deemed had been chase-worthy. "No one gets it yet. I don't know how to make it official. All I know how to do is hit this ball, and catch it when it comes at me. I want to call this game baseball, but I need help to make it happen."

First Base dropped his bat and started trotting towards the first bag. "You just walked me. In order for you to throw a strike to get me out, it has to be thrown over the plate three times. Four times outside the plate and I get to walk over here."

Remington pointed to the bag. "And what's that?"

"Yeah, my name is First Base, and I'm standing on first base."


After a short hour of learning a confusing game, all the ponies went to the locker rooms. Remington hadn't felt like he got much exercise in, but he was still sweating and in need of a shower, so he took his gym clothes off and walked into the shower. As more stallions entered the locker room, several layers of chatter could be heard. "Dude, F.B., that game is crazy. You make me laugh so hard it hurts me inside my bones, haha."

"Glad you liked it."

"Glad you liked it," Remington mocked while staring at the shower walls, water now pour over his mane and poll.

First Base offered a hoofbump. "Appreciate you taking a chance on something new, even if it's not your kind of thing." Remington copied the hoofbump back to him.

As he showered, Remington started thinking about his day and the fact that it wasn't over yet. In less than an hour, he expects to meet up with his friend Moonlight in his room to help him study. The red pegasus knew that it might lead to something else, but he had no idea what that would be. He had no idea what he was doing. All he knew was that he wanted to make a move, and tonight would be the first time he could try it, if he was up for it.

Water beading down his pelt, he started daydreaming about the kind of things he would say to her. For instance, what if she was in the shower with him right now? What would she say? What would he say back? Every time she talks, he listens. If she was getting dumped on by water like he was, her pelt would glisten even more now than when she was dry. "Oh my, Luna, I like it."

"Nothing." Remington quickly excused himself out from underneath the shower heads and back to his locker, holding a towel that would eventually dry his body. When he started grabbing his school uniform to put it back on, the pink sparkly brush he found dropped out of the bag and onto the floor. He quickly picked it up and held it away so nopony else could see it. When he held it close, he noticed it had a specific fragrance to it. He held it to his nose and gave a soft inhale. It smelled like her. He didn't really know how he knew that, but it smelled like her. "Holy shit, she smells like heaven." He continued to be amazed at how enamored he was with just the idea of being around her. "Oh my Luna, I like her."

"Yeah I heard you like her." First Base was standing next to Remington holding his towel at his head trying to dry his mane.

Remington fumbled the hairbrush and stuffed it in his bag. "What? How could you know that?"

First Base chuckled. "You're talking about that Moonlight chick? Pink-ish color, sparkly mane, unicorn? I see you with her all the time. I just figured you guys were already an item. Not yet though, huh?"

Remington didn't want to be a jerk, but he was feeling awfully insecure. The amount of vulnerability he felt when thinking about her made him feel like not talking to anyone. "We're just friends."

"Oh really? So you don't mind if I made a move?" Remington gave First Base a look that should transcend meaning and not require verbal explanation. "That's what I thought. Bro, it's OK! You just gotta make your move. Everything is about making your first move. It's just like baseball. You gotta put the ball in play and see what happens. Step up to the plate and swing for the fences."

Remington stayed quiet for a moment, but after realizing First Base would confront him while maintaining a boundary, he was willing to hear him out. "But what do I do after that? What do you do after you hit the ball?"

"After you hit the ball, you just get to the first base. It's called a single."

"After that?" First Base began plucking his ears of excess water. "I dunno, dude. All I know how to do is get to the first base. Everything else after that is all about how the rest of the game plays."

"How do I play the rest of the game from first base?"

"That's just it. You're not the only one playing the game. You have to rely on others to get you to second base and third base, and back home. You gotta put the ball in her court." First finished drying himself off and threw his towel in the laundry bin. "Who knows. Maybe she'll catch you stealing." He laughed and walked away.

Remington understood everything except what stealing had meant in this context. But he knew that First was right. He needed to make a move. And it had to be tonight. The longer he puts this off, the longer it'll continue to bother him. Remington quickly snapped his uniform on and put everything in his bag along with the hairbrush and saddled it on his back. He began cantering out of the gym and to Stygian Hall, where his room was.